Enniskillen Royal Grammar School ABP Angus Youth Challenge finalists, Anna and Aaron Flanagan, Thomas Kerr, James Ritchie and their teacher Mrs Heather Kettyle have just returned from a two-day beef supply chain study tour to England.  The Enniskillen Royal pupils travelled with twelve other finalists from Belfast Royal Academy, Rainey Endowed in Magherafelt and St Louis Grammar in Ballymena.  The all-expenses paid trip began with an induction programme at Loughry College where the pupils were briefed on the role of the Livestock and Meat Commission in Northern Ireland, this being followed by a cookery demonstration delivered by one of the LMC’s demonstrators.  Before departing for the airport, pupils were given a guided tour of CAFRE’s Food Innovation Centre.

The next day got off to an early start with a visit to a calf-to-beef farm at Oswestry, Shropshire where pupils had an opportunity to tour the farm and see the facilities.  The farm was comprised of 700 acres of arable land and 400 acres of grazing; carrying 430 cattle and 700 ewes.  The farmer emphasised the importance of environment, nutrition, health and genetics as being the four key elements in running his business successfully; he stressed the significance of getting the balance of these fundamentals exactly right to ensure a good profit margin and leave the farm sustainable for future generations.

Having seen the first stage of the ‘farm to fork’ chain, the finalists then travelled to ABP’s state of the art beef processing factory at Ellesmere where they were welcomed by Steve Thompson, General Manager, and given a guided tour of the plant.  This ABP site saw a £30 million investment in 2015, employs 950 people and kills 1400 cattle each week.  The lairage was designed by Dr Temple Grandin and incorporates several features including split level loading bays, rubberised flooring, herring bone design, curved inclined race and NAWI stun box, all to maximise welfare of the animals.  The Ellesmere site is leading the ABP Group-wide sustainability agenda with many initiatives in place but one which attracted the pupils’ attention was the combined heat and power engine that provides heat and electricity to the site using biofuels and refined tallow (animal fat) from the site’s beef processing operations.  The four young finalists then attended a workshop conducted by a member of The Worshipful Company of Butchers, the session focusing around identifying the different cuts of beef.  Before leaving Ellesmere the four finalist teams each gave a presentation to the management board on their progress in the ABP Angus Youth Challenge competition.

Prior to flying back to Belfast, a visit to Sainsbury’s in Shrewsbury allowed the young people to see the final stage in the ‘farm to fork’ chain with the finalists being able to recognise how consumer demand can dictate decisions taken back at the farm stage of production.

After two very busy, but enjoyable days the Enniskillen Royal pupils returned home to put their newly acquired knowledge and skills into practice when rearing their five Aberdeen Angus cross calves through to finishing; the five calves were awarded to the four finalist schools back in May and there is a further £1,000 on offer to the overall winning school in approximately 12 months’ time.

Reflecting upon the study tour, Thomas commented that he ‘was very impressed with Dr Temple Grandin’s lairage design at the Ellesmere plant.’  Whereas, Anna found it ‘interesting to see farming practices in another part of the UK and to be able to transfer this learning back to our own calf rearing and accompanying project.’  Aaron said, ‘it was a fantastic opportunity to tour ABP’s leading UK food processing plant’ and that ‘it was an exceptional experience for the team who were greatly impressed and highly motivated by what we learned.’  Finally, James recognised that ‘it was an exceptional experience and as a group we are extremely grateful to the ABP Group and the Northern Irish Angus Producers’ Group for affording us this opportunity.’ 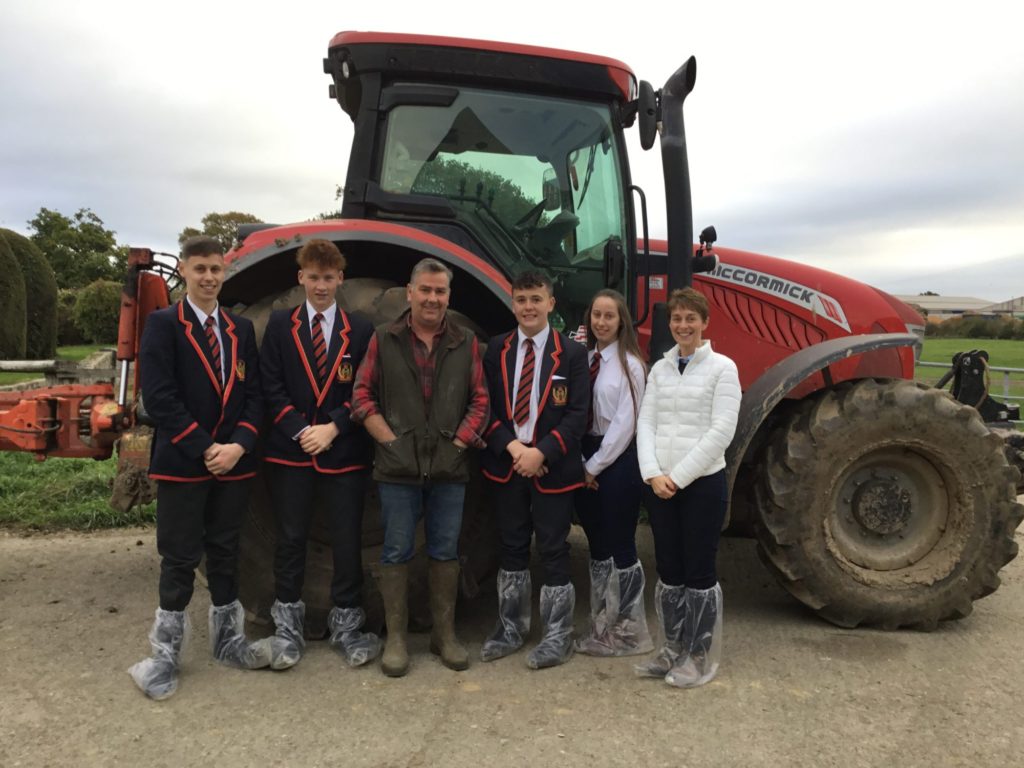