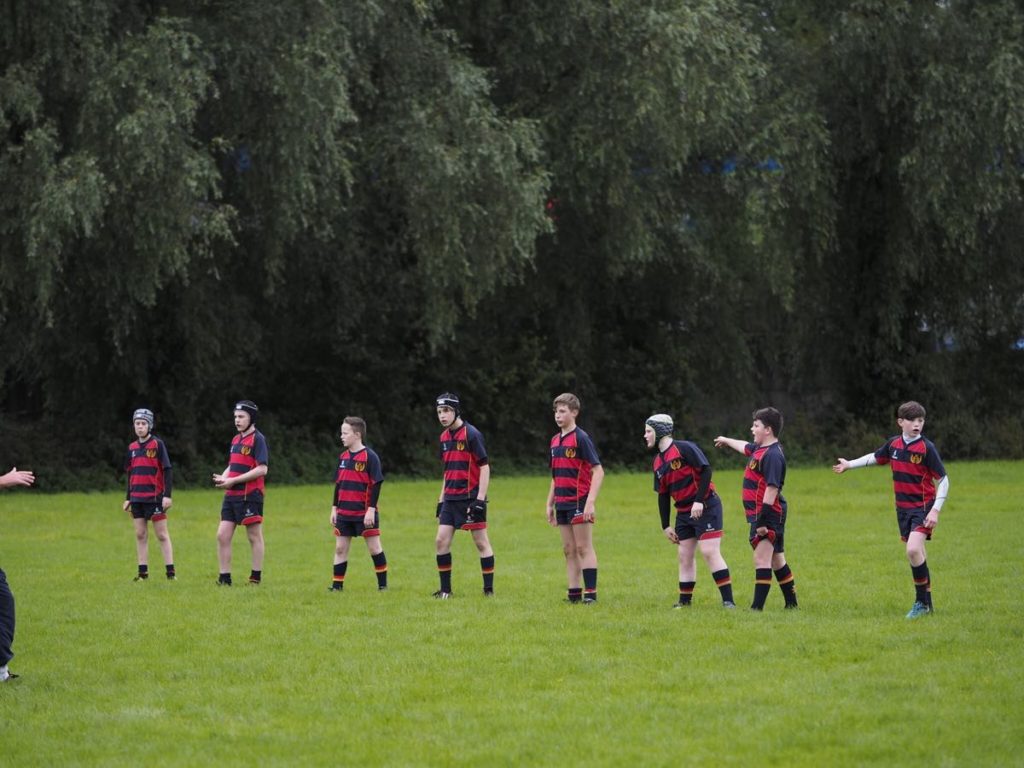 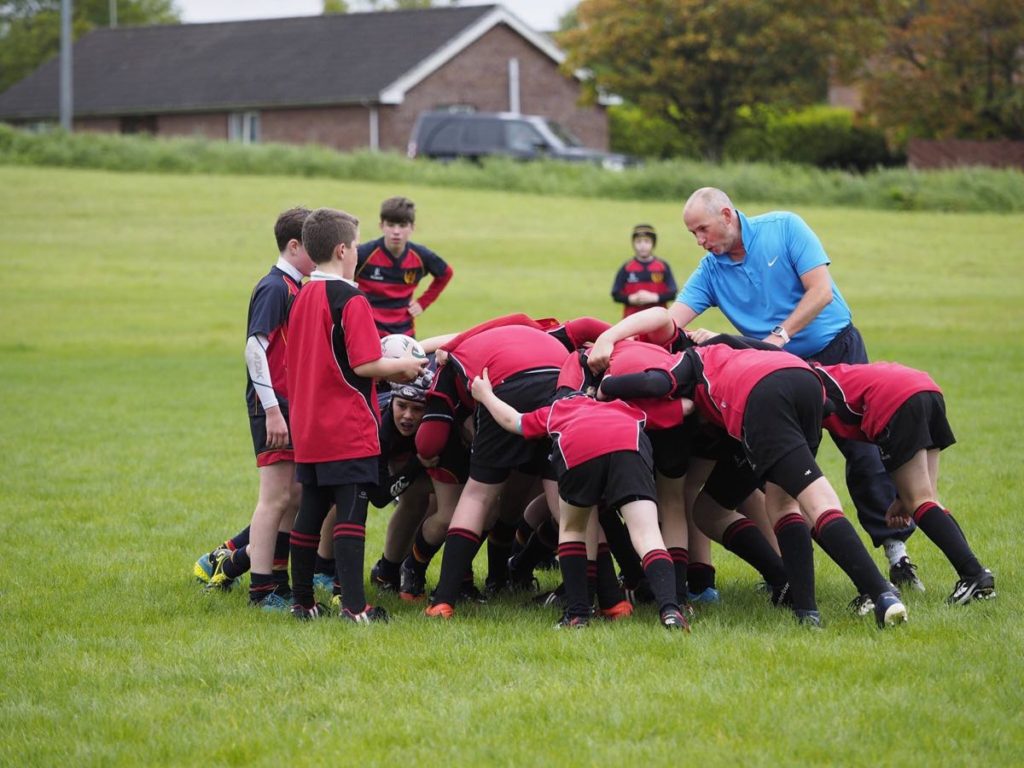 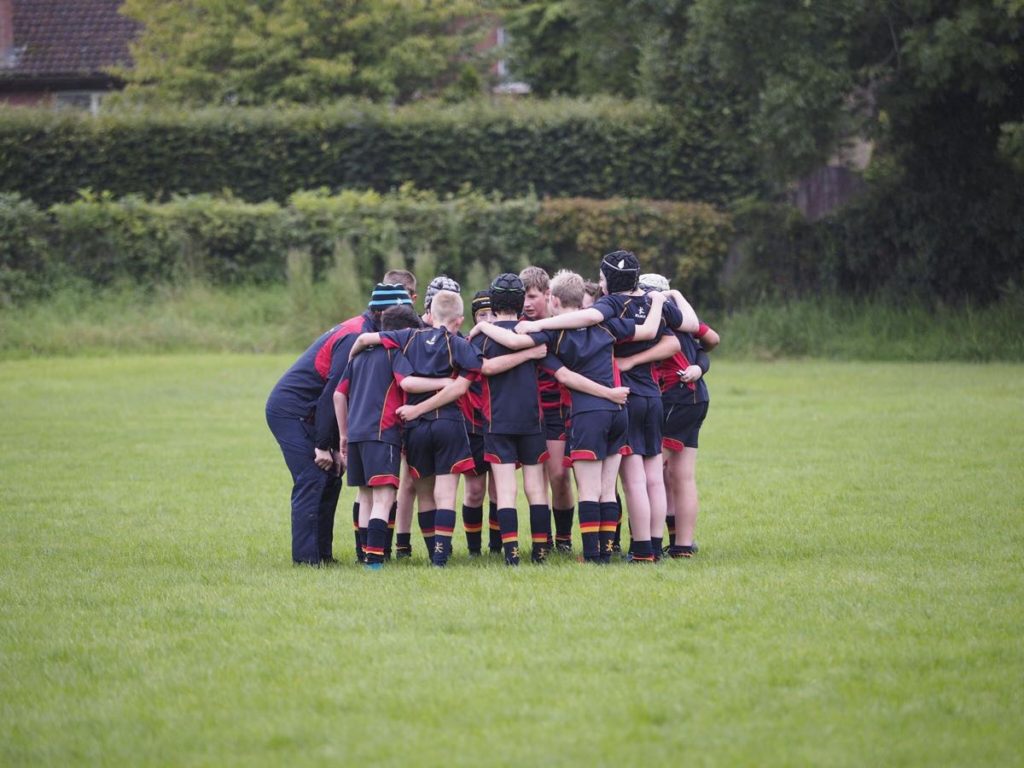 In dry and ideal rugby conditions the ERGS U13 team, led by Karl Bothwell took to the pitch at Castle Lane for the second game of the season against a large and physical Regent side.
After a narrow defeat to Foyle last week the boys had worked hard on tackling, ball retention and defensive lines during training, and this game proved that all that work had been worth it.
From the kick off it was evident that this young ERGS team had flicked a switch, and the first 10 mins of rugby was simply a pleasure to watch. The rucking, tackling and pressure was ferocious and this led to total disarray within the Regent side. With a decent pattern established, willing runners, wonderful ball retention, and great distribution by Hamill at scrum half, it was not long before the first score. From a relieving kick by the Regent out half, Harte picked up, and after stepping on the gas he showed his ability and scored a wonderful solo try from his own 22. The conversion was missed.
From the kick off the pressure was soon back on Regent with simply more of the same. The back row of Graham, Nelson and Aiken applied the pressure, and with the aggression and confidence building ERGS were soon back within 5 metres of the Regent try line. From another well won ruck, Hamill sniped around the fringe to wriggle his way through for a typical scrum half score. The conversion was missed.

A storming run by Aiken, ably supported by the hard running Smyton, from the restart again made hard yards against what was becoming a more and more disorganised opposition, who were conceding a number of penalties for high tackles, appropriately dealt with by the referee. Several rucks followed, and ERGS steadily moved up the pitch with controlled play by the half-backs. The patterns worked on in training during the week were showing signs of fruition, with great back row support for the jinking, and brave running by captain Bothwell at inside centre. It was from a 4th phase of play that a quick pop pass to the steam train that is Seaman saw him crash over the line to get the 3rd score. Conversion was missed.

With such a fast start to the game, and with their tails up, the smaller but more agile ERGS pack, led by Clarke, started to dominate the loose play, and with continued clever distribution by Hamill at scrum half, switching play back and forth, it was not long before the gaps appeared. Going blind once again, a quick interchange between Love and Burns on the wing saw Love open the legs, and with power and determination smashed over the line, out wide, for the 4th score of the game. The conversion was narrowly missed.

Bothwell and Clarke had to work hard to keep the level of excitement down as the game started to flair a little in some quite heated exchanges. Aiken received a warning for loose feet in the ruck, and for the first time in the game ERGS were on the backfoot. Despite some great, in-close defence, Regent managed to sneak the ball to their strong running centre, who broke through some tackles out wide and simply had the speed to make it under the posts. The conversion was nicely slotted over.

For the rest of the half ERGS had to knuckle down and defend hard. Some good kicking by the Regent number 10 kept the pressure on, but with good signs of discipline and organisation ERGS made their tackles count and kept Regent at bay. The defensive charge was led by Seaman and new starter Hetherington, who bravely tackled his heart out all match.

The first half ended with ERGS dominating again, with strong running by Clarke and by Bothwell and Carrothers in the centre; all coupled with great ball retention by the whole team and a growing belief that the game was theirs to win.

The second half kicked off, and ERGS simply repeated what they had done at the start of the game. With more fast, aggressive rucking and sensible ball distribution by Hamill, ERGS again had their tails up. Graham coming more and more into the game helped secure fast ball, which after several phases of play led to Smyton showing his upper body strength to power over the line and make the score a more comfortable 25-7.

Straight from the restart ERGS were up and at it again. More of the same was to be demonstrated by the boys, with Burns, Aiken and Carrothers all having the confidence to run at the opposition safe in the knowledge that the supporting players were right behind them. Without missing a beat, a great call by Love to Hamill saw play switch blind, and after evading 2 tacklers Love showed that strength again, to power down the line and round under the posts to grab his second well deserved try. Hamill converted.

Following these 2 quick tries the game then took on a slightly different direction, and after several penalties for high tackles and indiscipline from ERGS, Aiken received his second warning for loose feet and a forced substitution was made by the referee. Losing such an influential player is always hard, but under some good leadership the ERGS team knuckled down for what was going to be the toughest 18mins of the game for them. In came McHugh at No8, who very ably stepped up to the mark.

What followed was sustained pressure from Regent, who had managed to settle and release their big powerful runners, who started to take the game to ERGS. This placed the ERGS defence into new territory and suddenly the ball was on the other foot. Continued penalties soon had the Regent side in the ERGS 22, and for the next 7 mins ERGS had no choice but to empty the tanks in an all out defensive effort. To a man they worked hard, some great hits from Seaman and Hetherington, and super line speed by Love and captain Bothwell, kept the pressure on and allowed Graham and Nelson to steal ball and harrass the Regent half backs as they tried to link phases of play. Not all tackles made in this phase can be concentrated on, but a huge hit by Love, a brave tackle by Hamill on the large number 8, and a smash by Graham on the Regent out-half, all placed doubt in the opposition’s minds, and the mental battle was being won.

Substitutions were made, with Kerr replacing the injured Clarke, who had a super game in the front row and led by example; Elliott for J Corrigan, who had another very solid performance at fullback; McCabe for the ever improving Burns on the wing; and Magee replacing the impressive Harte, all coming on, making an impact and adding to the overall performance.

The sustained pressure on ERGS, with no reward for Regent, was a wonderful testament to the guts shown against a much bigger opposition. On a final foray into the ERGS 22, Regent released their powerful No6, who looked likely to score but for a gutsy hit by Graham, who, doing what he does best, was quickly on his feet to jackal the ball. From the resulting superb support play, ERGS could clear their lines through the backs.

The game then shifted again, as the fitness of the ERGS’ team started to show and they started to make ground. More brave running from Bothwell led to a good position, but unfortunately the ball was lost in the tackle and Regent scored another great individual try.

Bothwell rallied his troops for the final 5 mins, and it was pleasing to see ERGS end the game comfortably on top. Seaman grabbed his second of the game, well deserved for another strong performance, with Hamill adding the points.

Overall a much improved performance from the whole squad, demonstrating that with improving self belief, some fire in the belly, and from working hard in defence, this team can play a very effective style of winning rugby.