JOURNEY INTO THE PAST FOR ENNISKILLEN CADETS

Home Latest News JOURNEY INTO THE PAST FOR ENNISKILLEN CADETS
NextPrevious

JOURNEY INTO THE PAST FOR ENNISKILLEN CADETS

Students from Enniskillen Royal Grammar School have been stepping into the past with a journey of discovery around some of the World War I battlefields of Belgium and France.

History came starkly to life for the teenage members of the school’s Army Cadet Detachment as they visited landmarks along what was once The Western Front, the principal theatre of war from 1914-18, and learned about the unprecedented loss of life in ‘the war to end all wars’. There were more than 17 million deaths and 20 million wounded, making this one of the deadliest conflicts in human history – and, as the Cadets discovered, many of those who sacrificed their lives were themselves little more than teenagers.

It was an intensely moving learning experience, as Colonel David McCleery from the Army Cadet Force Association explains. He says, “Many of our Cadets have studied World War I at school so they were already quite knowledgeable, but it’s one thing reading about World War I in a history book but quite another to make the Battlefield Tour pilgrimage. I think we were all rather overwhelmed as we visited the trenches where so many men fought and died, then saw the sombre rows of headstones in the region’s many military cemeteries. Our Cadets were genuinely affected by all that they saw and heard during our visit and I know they were particularly moved when our Padre, Rev Jack Moore, officiated at brief acts of remembrance.

“The Cadet movement is well known for the fun and excitement it offers its members in terms of outdoor adventure, sociability and sport, but there is also a more serious side to the benefits we offer our young people, as this tour demonstrates. The visit was an enriching experience and I know it will stay with them for many years to come.” 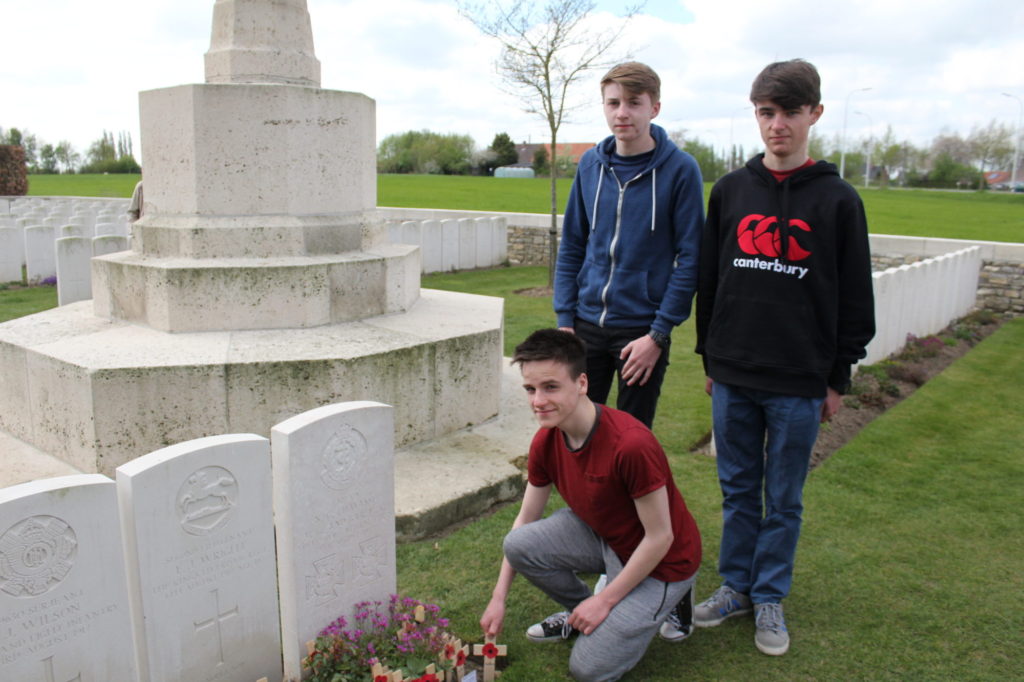 Pic Ref 1955 From left, Cadet Sergeant Aaron McElroy (15); Cadet Corporal Aaron Hicks (16) and Cadet Sergeant Matthew Kelly (15) are pictured paying their personal tributes at the grave of Captain Noel Godfrey Chavasse, VC & Bar at Brandhoek Military Cemetery. Famed as an Olympic athlete, Captain Chavasse joined the British Army as medical doctor and his bravery in helping injured men in the midst of battle was legendary. He is one of only three people to be twice awarded a Victoria Cross, the highest honour for gallantry.