Saturday morning… foggy and early start for me as I headed up the road to Craigavon. The 1st week of The Meadows Inter-Schools Tri League dawned. My 7am departure was nothing compared to those who had to be up at 5am to get the horses ready for transport!

Our entries were great this week, (with a few tweaks from the original ) representing the following Events:

Just as everyone approached The Meadows, the day turned from fog to bright, glorious sunshine, a beautiful start to the League.

8.30am on the dot saw Lucie-Anne take to Arena 1 as the very first rider in the competition as ERGS were Team 1.  She and Bobby enjoyed galloping around the course and managed to secure the team’s first double clear.

She was immediately followed by her sister Tiana-Grace on Echo – this pair also rose to the challenge of a long absence from competitive jumping by securing the team’s 2nd Double clear.

Finally, the third team member, Tori Lilly, entered the arena – a first for her in the ERGS colours. I am delighted to say that she kept a level head on her new pony Coill Dearmuid William (whom we’ve met before!) and added a 3rd double clear round for the first ERGS team.

Unfortunately, our 4th team member had to pull out due to transport issues at the 11th hour ☹.

However, a super start to the day from these 3 riders and their charges.

Our 2nd team had a slight change to the line up also as our 3rdteam member had a broken bridle just as they were tacking up and were unable to get it fixed in time to jump. However, not to be defeated…. ERGS rallied round and got someone to complete the team.

So – for her first time, Erin Wallace entered the arena to jump for the school.  She put up a strong performance on her pony Milo, with only a couple of 4 faulters, ensuring that she will be an asset to the team as we progress in the competition.

Next in was Tiana-Grace on her sister’s horse – again, a strong ride with only the one pole down, so 4 faults.

Finally, after lots of bribery ( 😊), Lucie-Anne rode her sister’s horse for the first time in a competition and surprised herself by how well she did. Only 4 faults.

Thank-you to Lucie-Anne for stepping in last minute.com, to ensure ERGS were still able to field their team. Also – thanks to all the Novice Team riders ( old and new) for a super start to the League.

The next event was to be the Open Teams, also in Arena 1.  With one of our riders ( Patrick Williams ) making his way up the M1 from his morning Rugby fixture, the other – sister Sophia was readying her Mum’s horse – Winnie, to jump ahead of our allotted Team time ( this allows for sufficient warm-up time).  In they went and had a most enjoyable round, with Winnie jumping well under Sophia’s guidance. Just one fence down 2nd from last, giving them a 4-fault total.

Patrick arrived and the pair got ready for their turn.  Sophia was in first in her own horse – Mongorry cruise Molly – and had an excellent double clear.

Patrick followed on his new horse Ariel, despite riding very well, the pair will need time to get used to each other’s nuances. A pairing to look forward to in future weeks.

With the team events over, we moved into the Individual events.  This is always a long-drawn-out affair as you can have between 60 and 70 entrants for the 75cm – 1m events.  The Primary school’s Events have even more again!

In the 75cm (Arena 2) , we had Erin and Milo going out first – they had lovely round coming away with only a 4-faulter. Not a bad way to finish her day. Her cousin Tess Wallace then made her first appearance for ERGS, being number 53, she had a long wait. She had a super ride, with her pony Elvis showing us what a force the pair of them will be in the future weeks. Very well done to these two young riders.

Meanwhile, the 1m Individuals were also happening in Arena 1, so I was running between the arenas trying my best to ensure photos were taken of all the riders and that I got to see them!  Rebecca-Jane Woods made her first appearance for the ERGS team on her new pony, Conny. She had a really strong ride with her new charge, but unfortunately incurred some faults. Nothing a bit of getting used to won’t sort out.

Rianna Mulligan appeared a little later with her reasonably new horse, Highlandy Rebel. This pair have done a couple of competitions together, so had that going for them. It was amazing to watch.  The two of them flew round the course – producing a double clear and a super speedy time of 25.27.  all she had to do now was wait and see if that would be good enough to get Top spot. Approximately 30 riders later, she got the best news… She was first! Super achievement Rianna, well-deserved!

Back over to Arena 2 then for the 85cm event.  Rebecca-Jane was into the arena as the 3rd rider and this time, she and Conny produced a double-clear. A great way to end the day. Rianna went in position 28 and again, she and her horse grew wings and flew round the course. Double clear and a time of 21.02 would ensure that no-one would catch her. So – Rianna added a 2nd win and another Rosette to Rebels bridle!

Huge congratulations to Rianna for her double wins in the 1m and the 85 Individuals.

Also, a massive thank-you to all our riders, but especially to our new riders, Erin, Tess, Rebecca-Jane and Tori. Delighted to have you on board girls – look forward to the next weeks.

Finally – thanks to the parents for bringing their children and horses to the event and the support you give to all the ERGS riders. 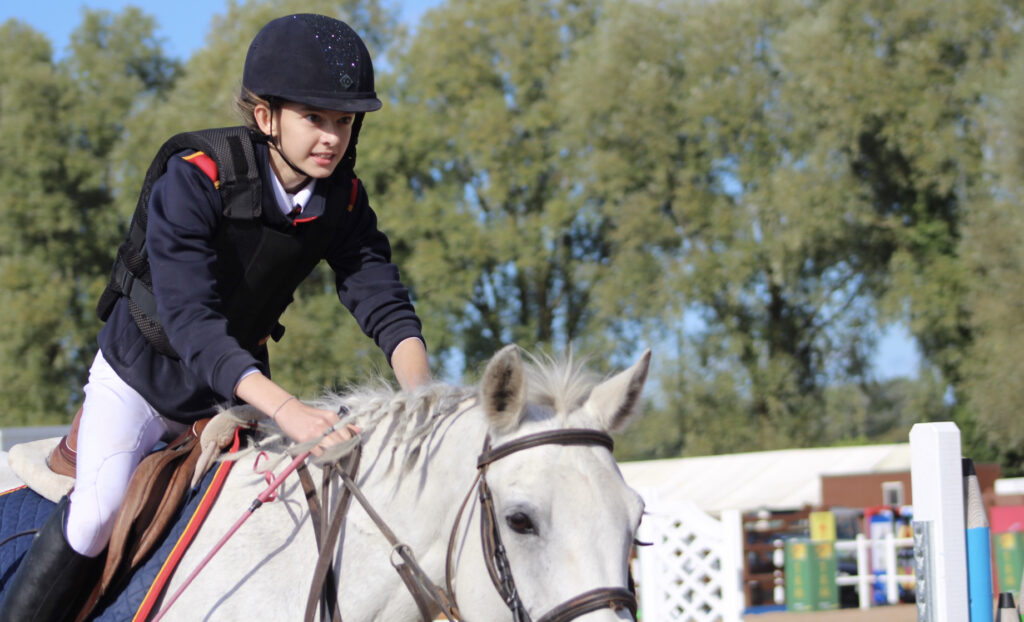 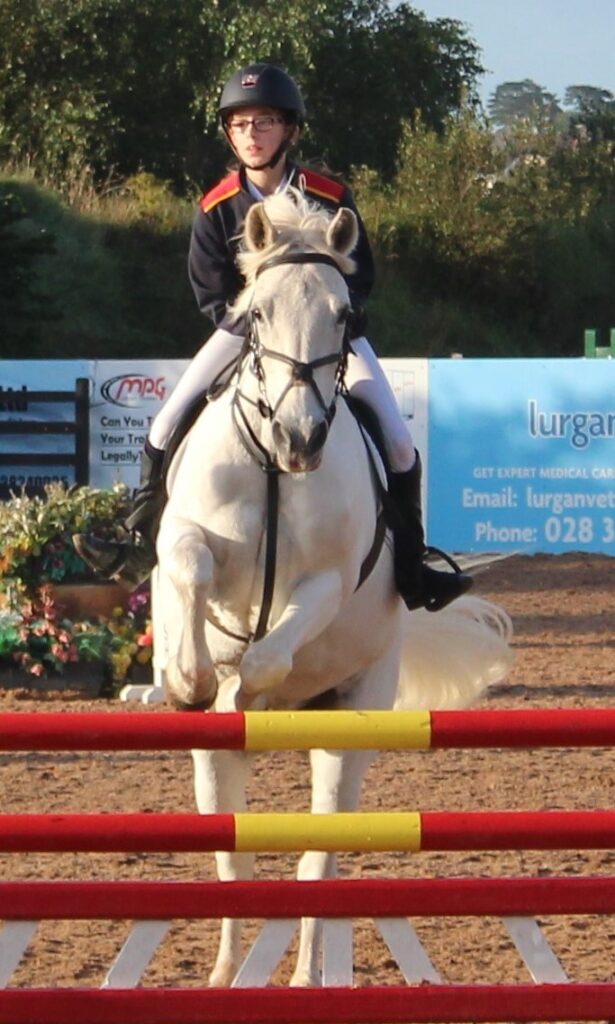 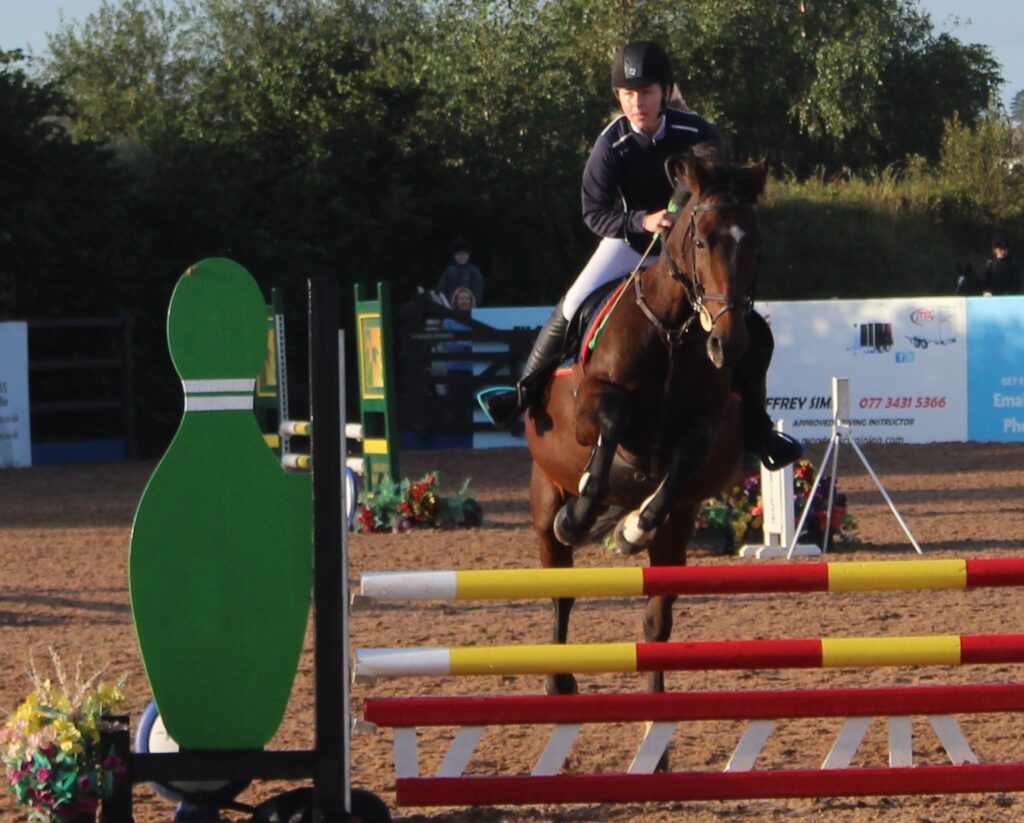 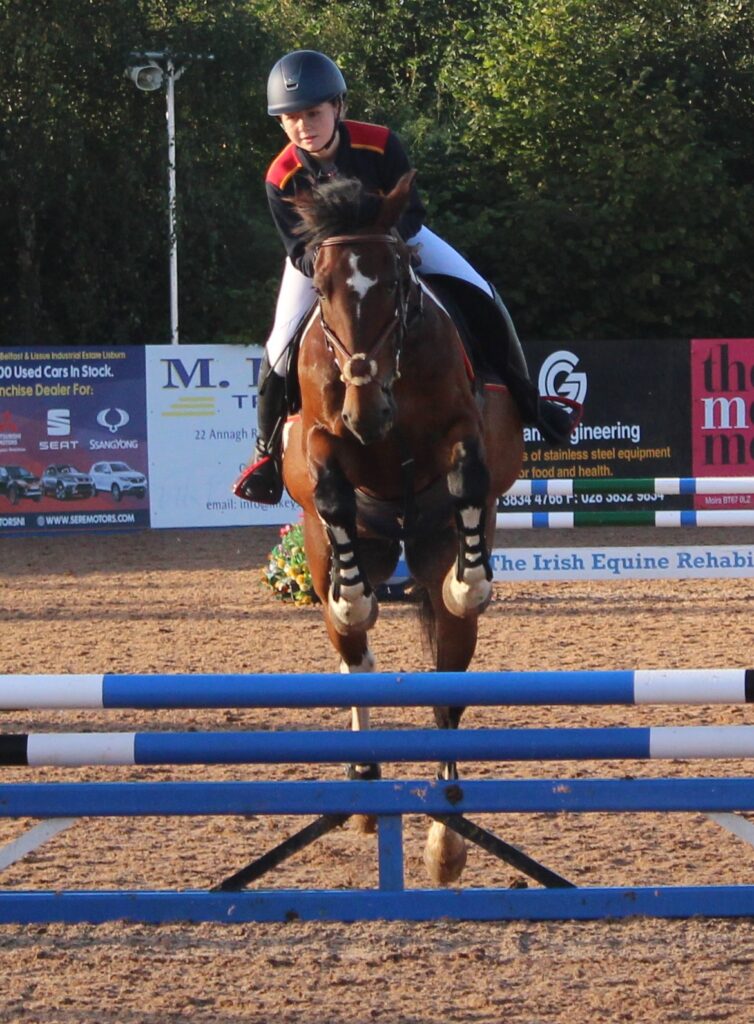 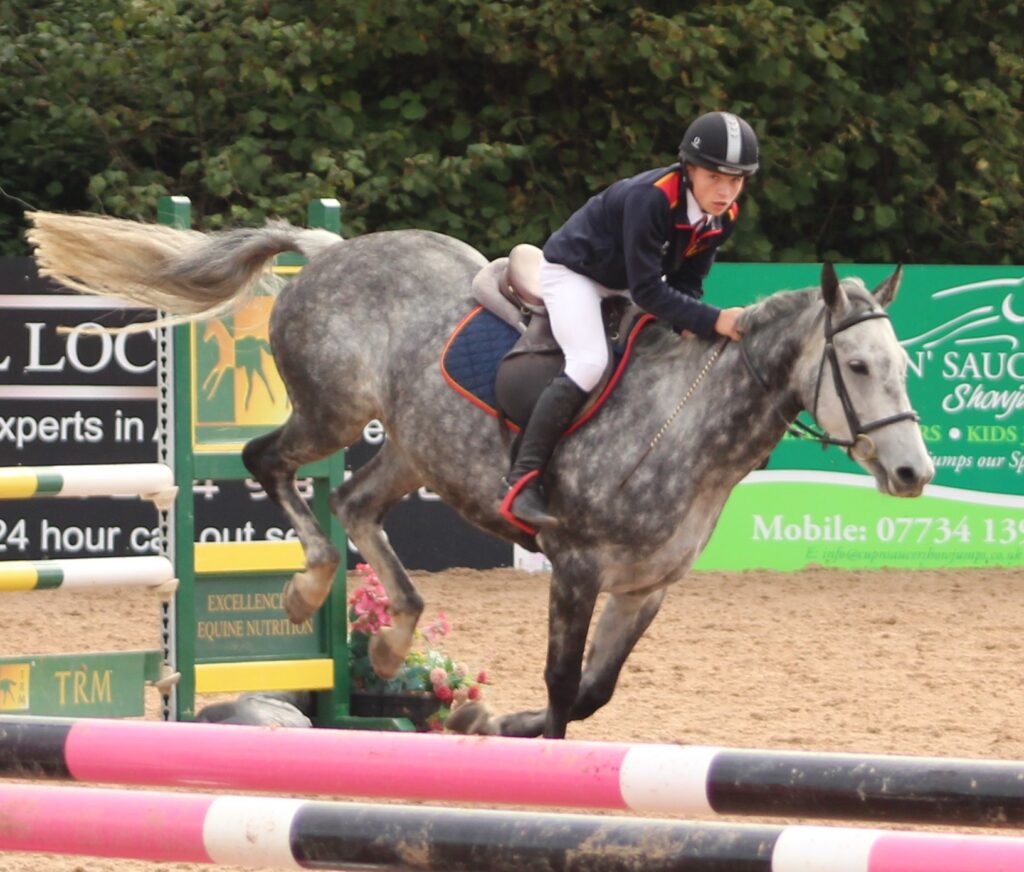 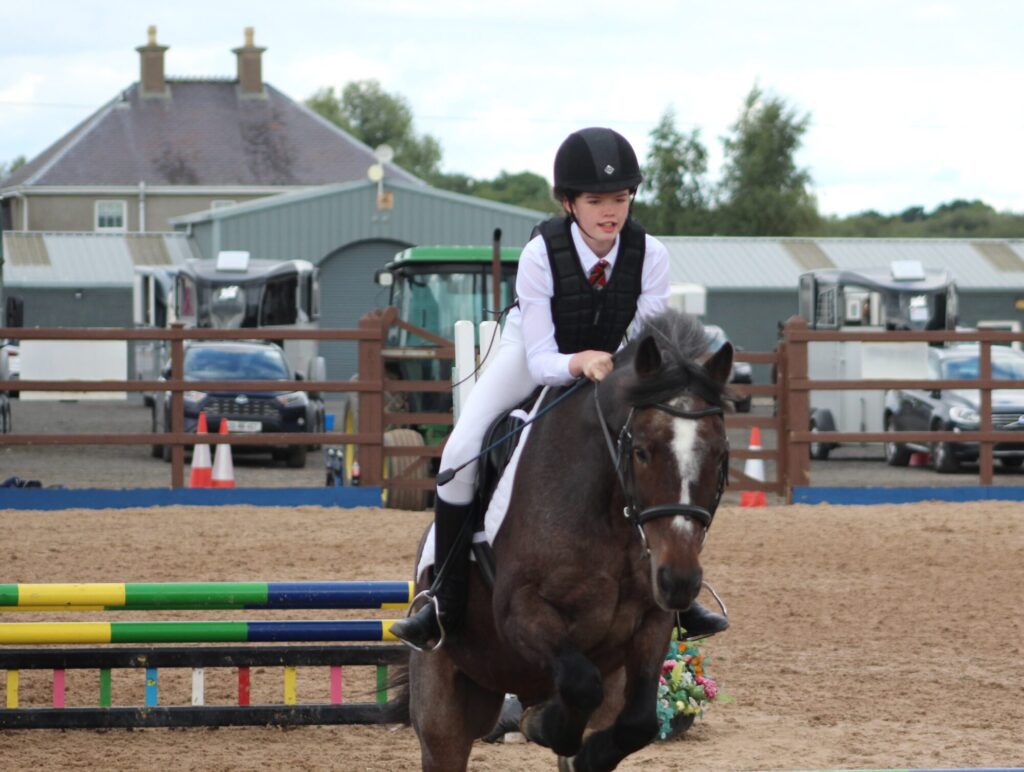 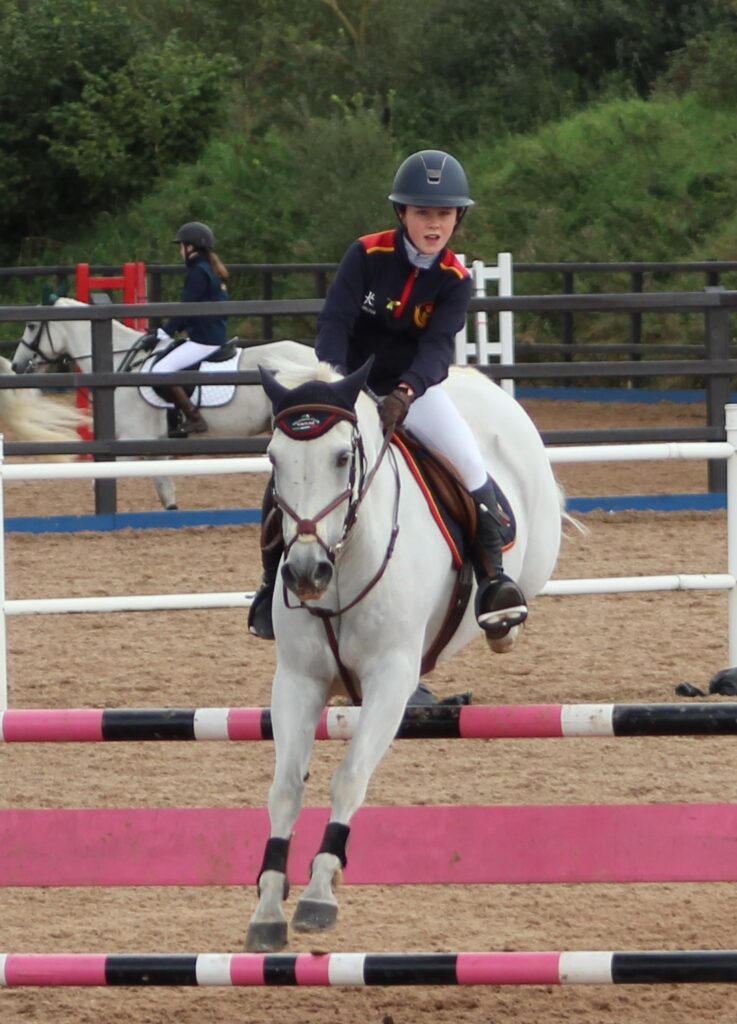 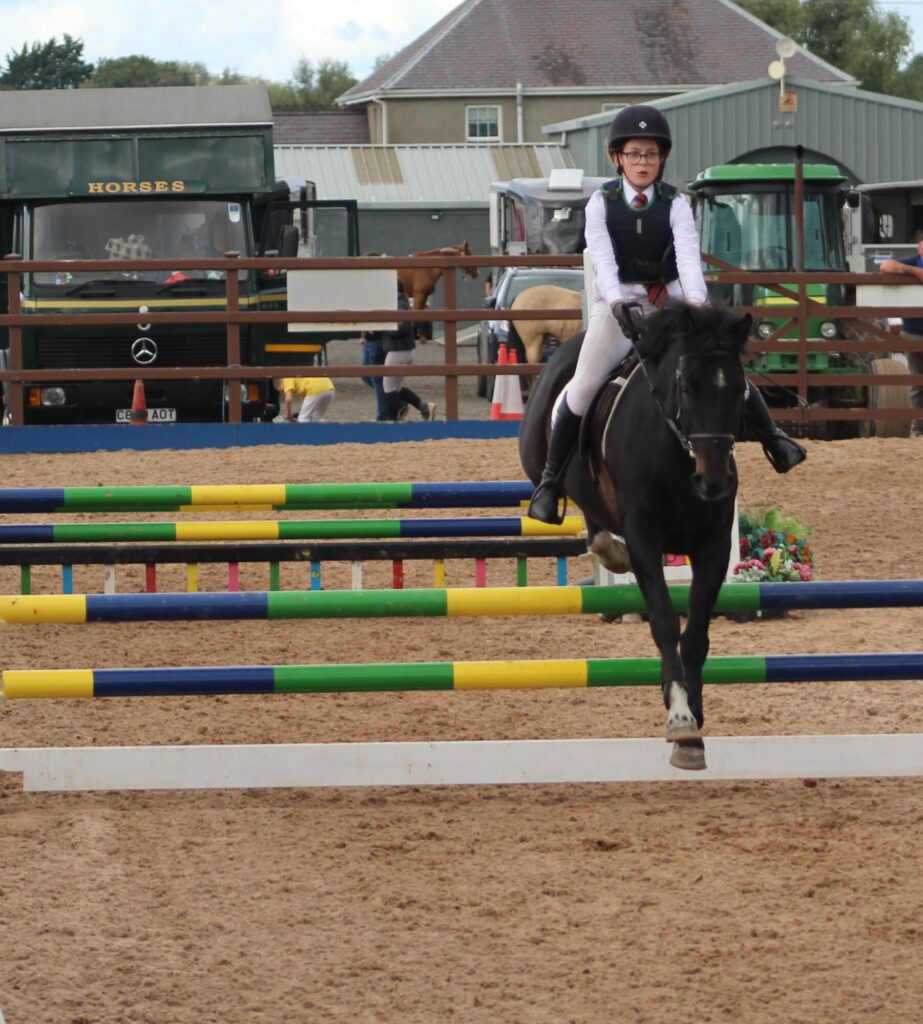 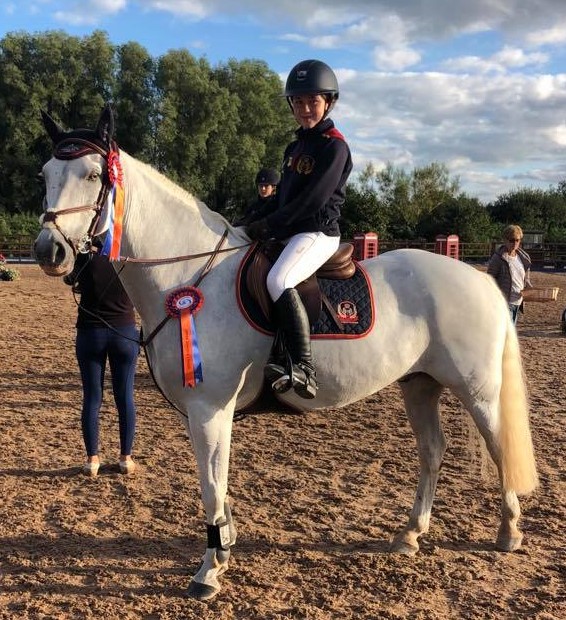