ERGS had 5 girls who travelled with the Ulster U18 7s squad to Barnhall RFC yesterday for the first of two Interprovincials, India Daly, Lucy Thompson, Catherine Graham, Katie Elliott and, Ulster captain for the day, Zara Flack.

Our first game was against Leinster who are known to play a fast, off-loading game, so the Ulster girls were primed for a lung busting encounter. A very tight battle commenced with a 10-10 score at half time, both teams missing their conversions. However in the second half Ulster contained Leinster and scored a converted try winning 17-10.

Next up was Connacht and with two Irish 7s players in their team we needed a good start to settle, it was duly delivered with a great try and conversion. Unfortunately Connacht came back with a very soft try and it was 7-7. With a half time talk to re focus the players, 2 more trys were scored by Ulster leaving the final score 17-7

The last game was against a big physical Munster team. There was immense tackling and try saving sprints down the wings by both teams and at half time, with a 5-5 score the 1 minute break was much needed. With only minutes to go, after another score by each team only a conversion separated them, but unfortunately Munster scored a contraversial try in the dying seconds, much to the surprise of both sets of coaches, winning the game 19-10.

So we sit second in the league with Leinster first on points even though we beat them in our initial game. We are hugely proud of the ERGS girls who all got game time and showed their ability admirably, Zara and India both scoring several tries.The next Interpro in Mullingar on the 28th April will be interesting to say the least, and with several out with injuries now, the next training session will be pivotal to building on their 7s mind set. 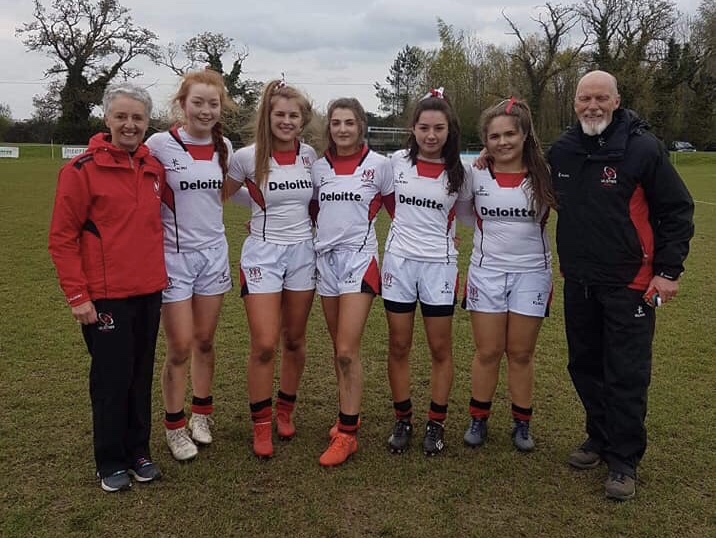