49 athletes from Enniskillen Royal Boat Club travelled to Dorney Lake, the home of the London 2012 Olympics rowing venue, for what is regarded as one of the biggest and most competitive school rowing competitions in the world.  The small Enniskillen boat club returned home late on Sunday night having proven that money isn’t everything, as it held its own against Britain’s top elite independent schools in what many will regard as a historic weekend for the club.
Kick starting a successful weekend for the club was the girl’s Junior 14 quad of Abby Corry, Kayleigh Bradley-West, Carragh Leonard, and Amy Pryce and coxed by Rebecca Conway. They came through each round well fighting their way to 6th position. Perhaps 6th does not justify just how well this crew rowed, as they had to compete in each round seeded in the unfavourable outside lane exposed to the wind.
Saturday saw the eights take centre stage for the main events of the weekend and first up was the girl’s Junior 16 eight. The crew coxed by Sarah Dolan showed their intent placing second after the morning’s time trial behind Oxford’s Headington before winning their semi-final. However, it seemed as if their morning’s efforts had perhaps take its toll as in the final they slipped to fourth just missing out on a bronze medal.
The girl’s male counterparts in the boy’s Junior 16 1st eights came through the morning’s time trial ranked second. The semi-final and final provided this crew with the opportunity to race against the elite championship crews. Having qualified for the B-final, the crew of Robbie Mills, Sam Balcombe, Jack McDade, Jack Kennedy, Matthew McBrien, Rory Blake, Connor Stewart, Michael Stewart and coxed by Ben Corrigan raced to the line with what appeared to be nothing separating 1st and 2nd. It took a photo finish to determine the crew from Hampton had managed to pip the Enniskillen crew by less than a foot to claim gold. 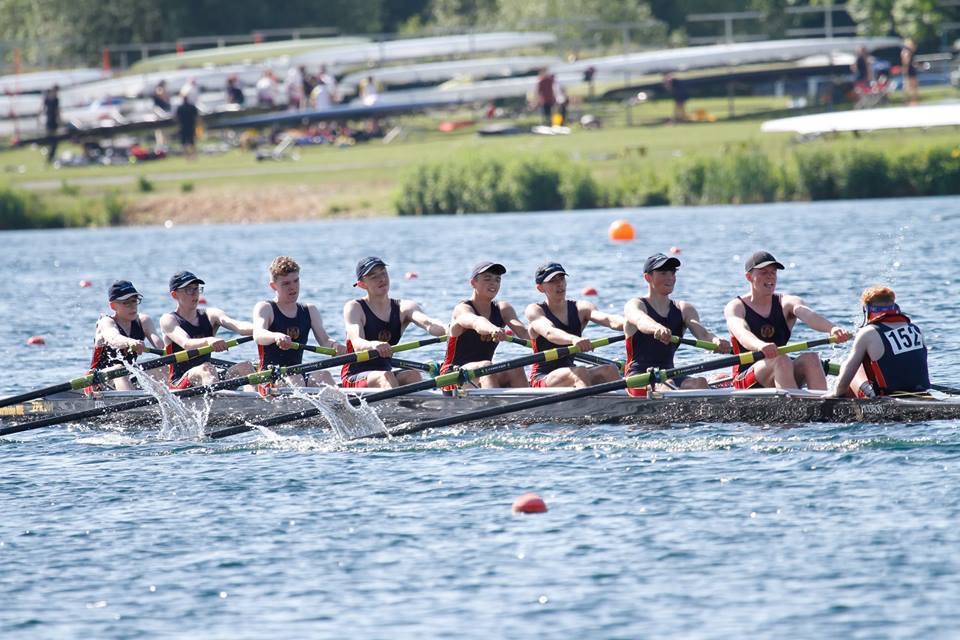 Similarly, the boy’s Junior 18 1st eight raced against their respective championship crews in what was some of the most ferocious racing on display over the weekend. They showed great maturity and resolve to book a final spot against their 1st eight opponents having been unhappy with their row in the morning’s time trial. With less than half a boat length separating the top four crews as they approached the finishing the crew of Nathan Timoney, Odhran Donaghy, Ross Corrigan, Aaron Johnston, Peter Murphy, Conor McLaughlin-Borlace, James Foster, Sean-O’Hare-Smith and coxed by Rory Farragher held on to a claim bronze medal.
On Sunday the success of the previous day was to act as motivation as the crews took to the water again. The Junior 16 girl’s set the standard early on as they again placed second in the morning’s time trial. Claiming the final qualifying position for the A-final, it was clear that the weekend’s exertions had taken  its toll on the girls. Nonetheless, the crew of Caoimhe Leonard, Zoe McCutcheon, Maeve Donnelly, Victoria Wilson and coxed by Sarah Dolan stamped their authority on the final in the first 500 meters and led the race from start to finish to finish one length up and winning the Anna Fangen Cup. What makes their achievement much more remarkable is that the entire crew is one year young for the event and Maeve Donnelly only started rowing in September. 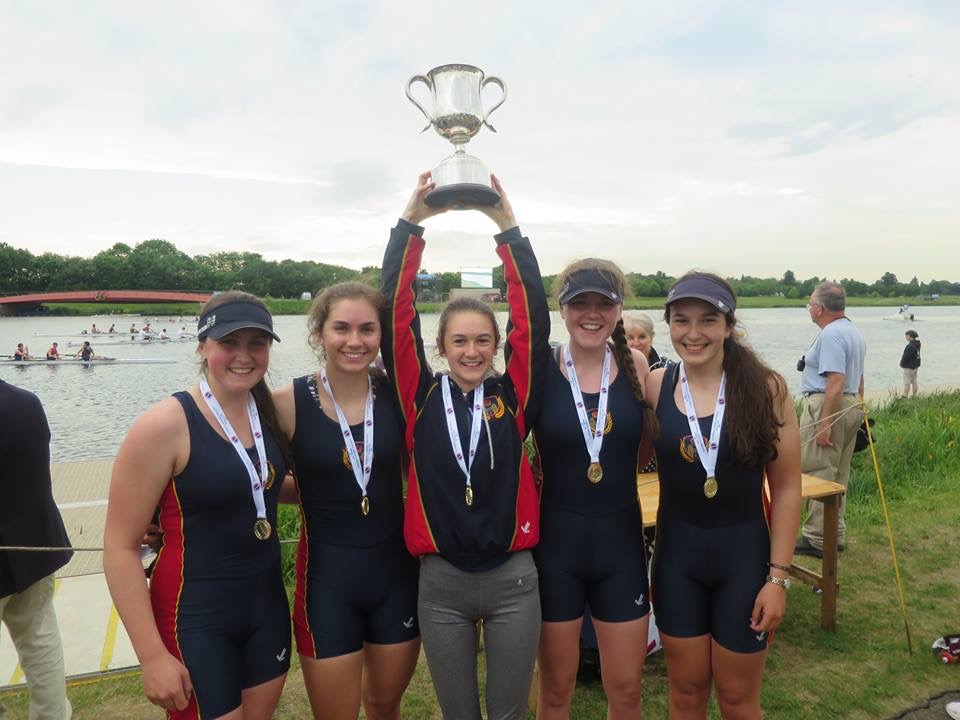 The medal rush continued on Sunday afternoon as the boy’s Junior 16 four booked their place in the A-final as one of the top seeds. At the halfway mark, the crew of Nathan Timoney, Odhran Donaghy, Peter Murphy and Robbie Mills trailed in second to the crew from Eton. However, nothing could deter the confidence this crew had in their ability in the second half of the race. With 250 meters left and half a length down the boys stormed through Eton in spectacular fashion to win the Windsor Cup. 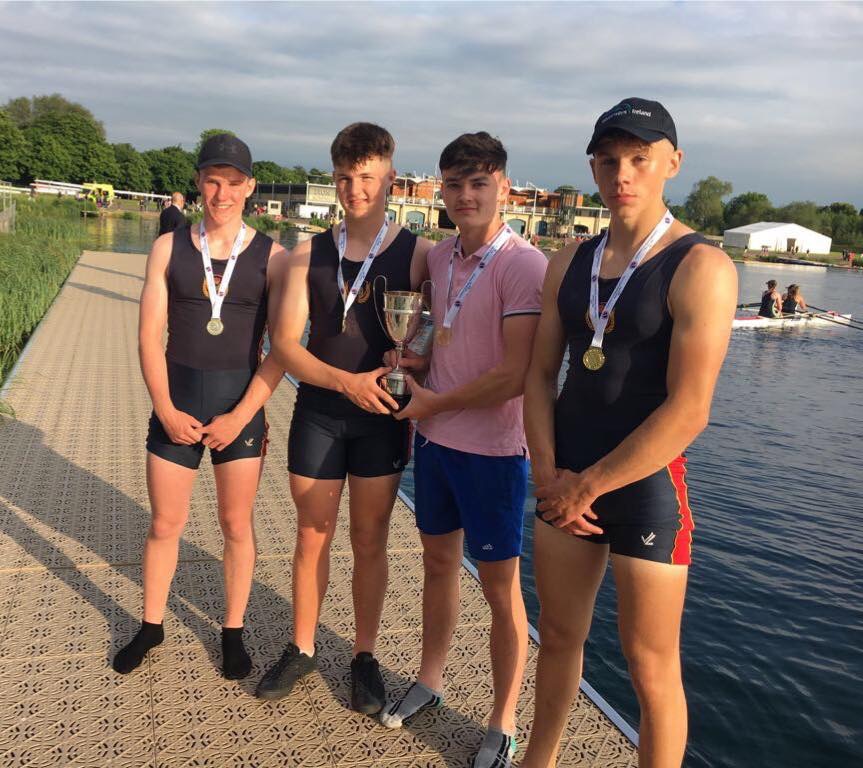 The girl and boy’s Junior 18 championship pairs rounded off a successful weekend for the club. The girl’s pair of Mia-Jayne Elliott and Miriam Kelly placed 5th in the A-final. Meanwhile the boy’s pair of Ross Corrigan and Aaron Johnston, just back from European Championships, claimed another silver medal behind the crew from Shrewsbury, bringing the club’s overall medal tally to two Gold, two Silver and one Bronze.
Indeed all crews exhibited some of the finest racing the club has ever seen mixing it with Britain’s elite. The Fermanagh athletes proved while they might not have access to the financial backing of private schools they certainly make the most of what they have on Lough Erne. With a month and a half left until the Irish Championships the club can look forward with confidence.