For the first game in the December run of home ties ERGS welcomed Limavady to Castle Lane on what was a lovely morning with good home support.

ERGS took to the field with yet again another changed side having lost the dynamic and influential Love due to a fractured elbow and pack leader and talisman, Smyton.

Captain Bothwell set his side out to receive the kick from Limavady, knowing that they had to perform on all levels and work hard to keep to the game plan as practiced in training this week.

From the kick off the ball was gathered by Seaman who after a typically strong run was hauled to ground within the visitors 22. ERGS poured into the ruck and with several phases quickly under their belt the home side had set out their stall in terms of how they wanted to play. Unlucky not to capitalise on the early territory ERGS spilled the ball forward and from the resultant scrum Limavady gained good ground to camp ERGS inside their own 22. Unfortunately the boys didn’t clear their lines and poor discipline gave the visitors 3 penalties in a row, all for off-side at the ruck. ERGS did defend well, however, a little bit of panic and miscommunication led Hamill to send a poor kick to the midfield. This was gathered by the large Limavady outside centre who had a simple trot from 22 meters to score the opening points. The conversion was missed.

After a stern few words from the coaches ERGS appeared to wake up and from this point in the game dominated the play, much to the pleasure of the assembled crowd.

From the restart Aiken got hold of the ball and with determination he made some hard yards coming to within a few meters of the try-line. A resultant 5 meter scrum to ERGS gave a solid platform for Aiken to pick and go and he crossed the line for a well taken try which helped settle the ERGS boys. Hamill missed the conversion.

With the tails and chins up, B Corrigan gathered the restart and with a nice solid run he created a lovely platform for the half backs of Hamill and Courtney. The ball was recycled through several phases with Courtney starting to get some control on the game. Several pop balls were followed by Courtney trying to get his backs moving however, the handling let the boys down as well as a slight over eagerness and this resulted in several knock-on’s in midfield. These gifted the visitors some relief on several occasions and the ERGS boys, try as the might, just couldn’t get the ball effectively through the hands. Eventually a relieving kick from Limavady fell into Elliott’s hands just outside his 22 who lit the fire and jinked and sidestepped his way for a beautiful individual try of some style. Hamill missed the conversion.

During the next few minutes the Limavady scrum half had to leave the pitch injured and with no subs the game was reduced to 14 a side. This didn’t dampen the game and the ERGS boys continued to press for another score. Clarke who had been coming into the game nicely managed to pick a loose ball 3 meters out but good defence by Limavady meant he was denied a score, due to being held up over the line.

With Monaghan on for B Corrigan the second half started with a bang. Courtney kicked off and instantly Limavady were under pressure. Aiken, Monaghan and the ‘engine’ Hetherington started to pump the leg drives and cause all sorts of issues for the visitors. Continued quick ball by Hamill at 9, allowed the game to flow a little easier and after another Aiken run ERGS were awarded a 5 meter scrum. Aiken again picked quickly and powered his way over for a second score. Hamill this time added the points.

ERGS were now in total control and started to up the pressure on a tiring Limavady side. With phase play, handling and decision making all improving ERGS entered into a golden 15 mins. Graham who was making his debut at inside centre started to take the ball into contact on first phase ball and this helped provide a better and more stable platform from which Hamill and Courtney could release the second, third and fourth phases of play. This created the momentum resulting in the ball being moved more effectively and securely and the ERGS boys worked hard to maintain the patterns they had trained on during the week. Seaman at openside was carrying cleverly with good lines of running and the courageous Clarke was having his best game of the season. Clarke was to get his just reward after another disallowed try when following a storming run by Monaghan from halfway, Clarke was on hand to smash over the line. Hamill again slotted the extras.

From the restart, that man again, Monaghan gathered within his own 22 and what followed was a sight to behold. Like a wildebeest, he powered his way past the half way line, with Limavady players strewn in his wake. Maintaining his leg drive and determination he crossed the visitors 22 and just kept going. Ably assisted by Nelson and Hetherington, Monaghan looked like a man possessed and he was eventually hauled to ground just short of the line. From the ruck, Hamill spotted the blindside gap and squeezed over for a typical scrum half try. He managed to add the points as well. Well done Ethan!!!

Again from the kick-off ERGS gathered and set up a nice series of rucks down the touchline. Courtney continued to call the moves and with the forwards and inside backs maintaining possession nicely ERGS crossed halfway with some style. Hamill, who now had the sniff of a gap took advantage of more quick ball from his pack and after a quick look went blind once again from the half way. Managing to evade the first couple of tackles he found himself on the touchline at the 22 and with some pace and grit managed to keep going, outflanking the defence to nip in at the corner and finish under the posts. A lovely individual try. He slotted the kick to add the extras.

The last 5 minutes were more of the same. Magee maintained the quick ball from the platform his forwards were providing and the backs continued to move the ball well.

From a ruck the ball was again moved blind and Harte beat 2 men to get over the line for a good wingers try. Magee slipped the kick wide. 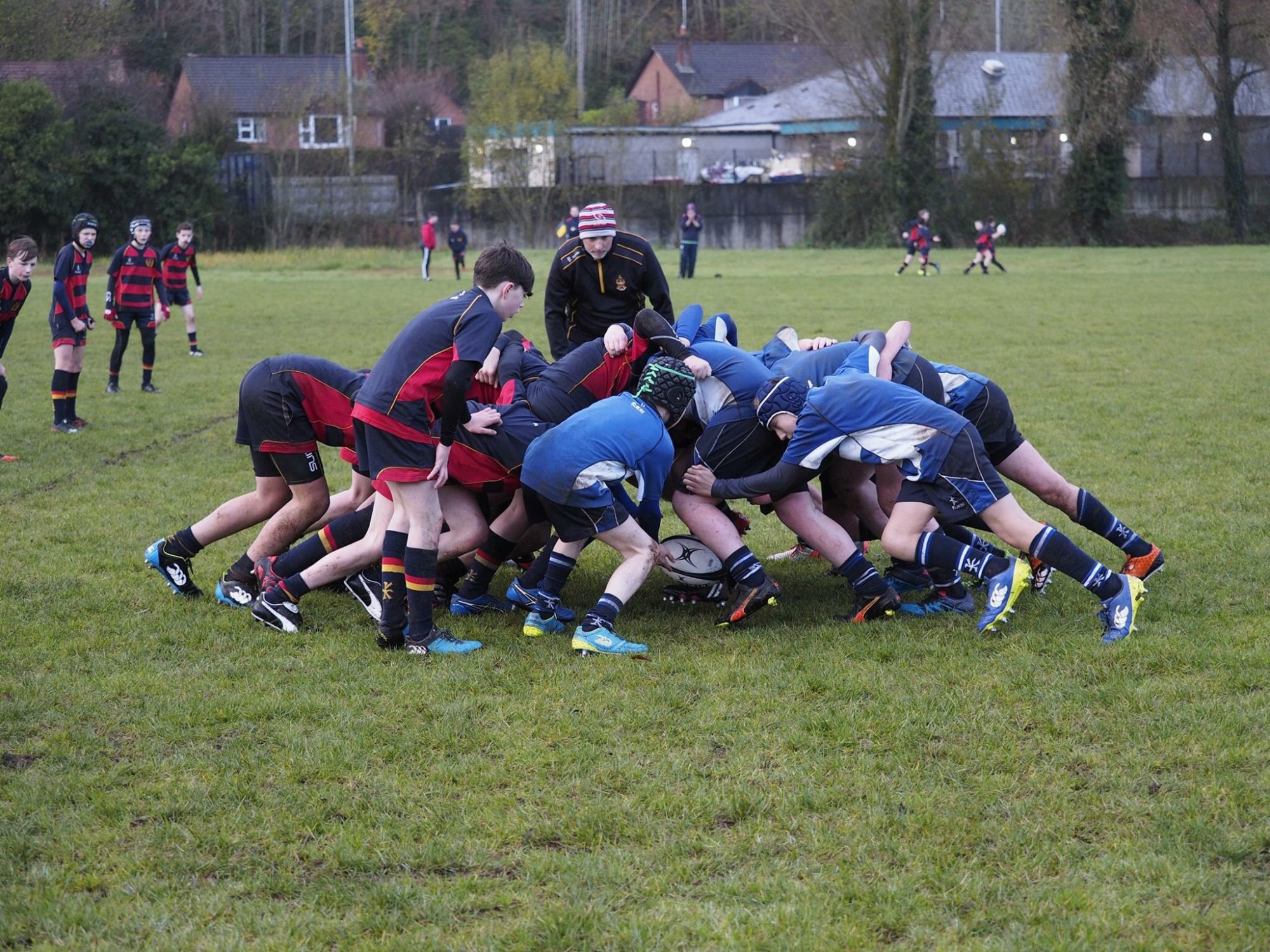 Overall a great win for the boys who deserved every point they scored.